Founded in 1914, our theatre continues to offer entertainment for all ages. 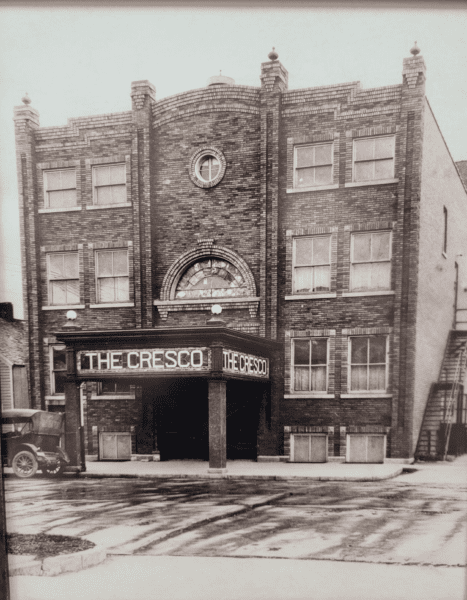 Frank E. Long of Chicago, a noted producer of vaudeville and plays for road shows of the period and a native of Cresco, returned to Cresco and attended a meeting of the Cresco Commercial Club. From this meeting sprang the desire to build a playhouse in the growing community. The former headquarters of local social gatherings, movies, and live performances was Lyric Hall. Constructed in 1875 Lyric Hall had fallen into disrepair and declared unsafe and a fire hazard by 1912. A stock selling campaign was initiated in early January 1914 to gather local support for this proposed construction project. The project was enthusiastically supported by the community and $18,000 was subscribed within the first six days. With the success of the sale of stock garnering 200 stockholders, a meeting was held on January 16, 1914 and the Cresco Opera house Company was organized. The board consisted of C.C. Burgess, president; O.J. McHugh, vice president; O.J. McHugh, vice president; E.H. Allen, secretary; E.P. Farnsworth, treasurer; and board members S.A. Converse, C.W. Reed, F.A. Huber, A.J. Thomson and W.H. Tilison.

Under the direction of Huber, the building committee chairman and McHugh and Read, building plans were put in motion with construction starting in the summer of 1914. J.H. Howe, a local architect did much of the design work. Although the final plans for the large structure were prepared by the Monarch Co., of Minneapolis, the actual construction process was completed by local residents. The draperies for the theatre were made by a local furniture factory whose superintendent, M. Johnson helped with the construction project. The Twin City Scenic Company supplied the stage scenery and the main curtain.

Construction continued into the fall of 1914 and the building was 'under cover' by November 10 with the roof completed the following week. The craftsmen doing the painting, plastering, carpentry, heating and electrical worked the rest of November, December and January. By the middle of January it was obvious that the new facility would be open to the public by the middle of February. Ticket sales for the grand opening reached $3,400 by January 15, 1915 even though a program had not been booked yet. Tickets were sold in a very unique manner as all tickets sold on or before February 10 went for $50 or more. On February 11 the price dropped to $20 a seat, to $12.50 a seat on the 12th; $7.50 on the 13th and after February 14 all remaining seats, if any were sold for $5.00. The February 18, 1915 grand opening featuring a New York touring company production of "High Jinks," was held before a packed house of 725. Opening night receipts were listed at $6,084 enabling the theatre to operate debt free. The first motion picture was shown the next night with both showings filled to capacity. The admission price was 5 cents and 10 cents that included a musical prelude by a an eight piece orchestra performing from the pit in front of the stage. The regular orchestra for silent movies consisted of Pearl Mitchell on piano, Grant Bowers on the violin, Charles Fisk on the clarinet and Will Deane on the saxophone.

The theatre remained under the direction of the Cresco Opera House Company, under the management of M.W. Appleby of Cresco, until the building was sold to Frank J. Wewerka of Osage in 1927. All original stockholders received their initial investment back with the sale of the theatre. Wewerka continued operating the theatre until he sold it to Floyd R. Puffer of Cresco in 1933. Puffer operated it showing mostly movies until selling it to Central States Theatre Corp. in 1940. Central States in turn sold the building to Joseph Mlinar in 1954 who operated it with his son Keith until it was given to the City in 1978. During the 50 plus years the theatre was privately owned the building underwent numerous changes. A new marquee was added in 1941 and the old wooden seats were replaced with cushioned seat. New projection equipment was installed with advent of "talkies" in the late 1920's. The decorative but not practical box seats near the stage were removed and with the disappearance of live productions the stage was boxed off for movies only. The ceiling in the lobby was lowered and the women's rest room was moved downstairs and the wall separating the inner lobby from the main seating area was changed. The assembly hall in the basement became a very large storage area. Evidence of many of these changes made by previous owners disappeared during the complete remodel and renovation in the 1970's. George Champlin, a Minneapolis businessman, retired to his hometown of Cresco and launched a campaign to buy back the seldom used building and return it to its former grandeur. A fundraising campaign had a dozen businesses and individuals each donating $5,000 to purchase the building. An additional $120,000 was raised, all through local donations, to remodel most of the building. The renovation including a new heating and air conditioning system, a new roof, a remodeled lobby, new sub floor and seats in the auditorium which was completely redecorated, and new projection equipment. On June 1-3, 1979, the Opera House was dedicated during a grand opening by Governor Robert Ray. A separate fund raiser financed the remodel of the basement that today is a banquet hall with a modern kitchen. Originally it was created to host dances and featured a maple hall. The basement named George Champlin Hall in honor of the buildings primary benefactor, hosted the meal site for area seniors. When this renovation was nearing completion, the Cresco Theatre and Opera House was deed to the City of Cresco debt free and continues to be owned by the people of Cresco.

In the fall of 2014 the City of Cresco took over managing the theatre. The Cresco Theatre Commission oversee the operations and use of the theatre. During the brief shut down, the carpet in the main theatre, the main lobby, the inner lobby and the stairs to the balcony was replaced. The lobbies were painted and remodeled moving the ticket counter to the east side of the lobby and expanding the concession area slightly. New curtains and cushions, photographs of previous productions, and a beautiful enlargement of a black white photograph of the theatre prior to 1941 highlight the extraordinary architecture in this historic building. In the summer of of 2015, two new HVAC units were installed on the roof of the theatre. These new units will help with the moisture in the building and help the Theatre become more energy efficient. In addition to the HVAC project, the Commission began the restoration of the marquee. Having been put up in 1941, the marquee was due for some TLC. Nagle Signs, Inc. of Waterloo were contracted to complete the project. Some of the work to be done includes replacing the neon with LED made to look like neon, the entire sign painted, the lighting on the side replaced with LED and new Lexan and a new bottom with LED lights. This project will help with energy efficiency as well. 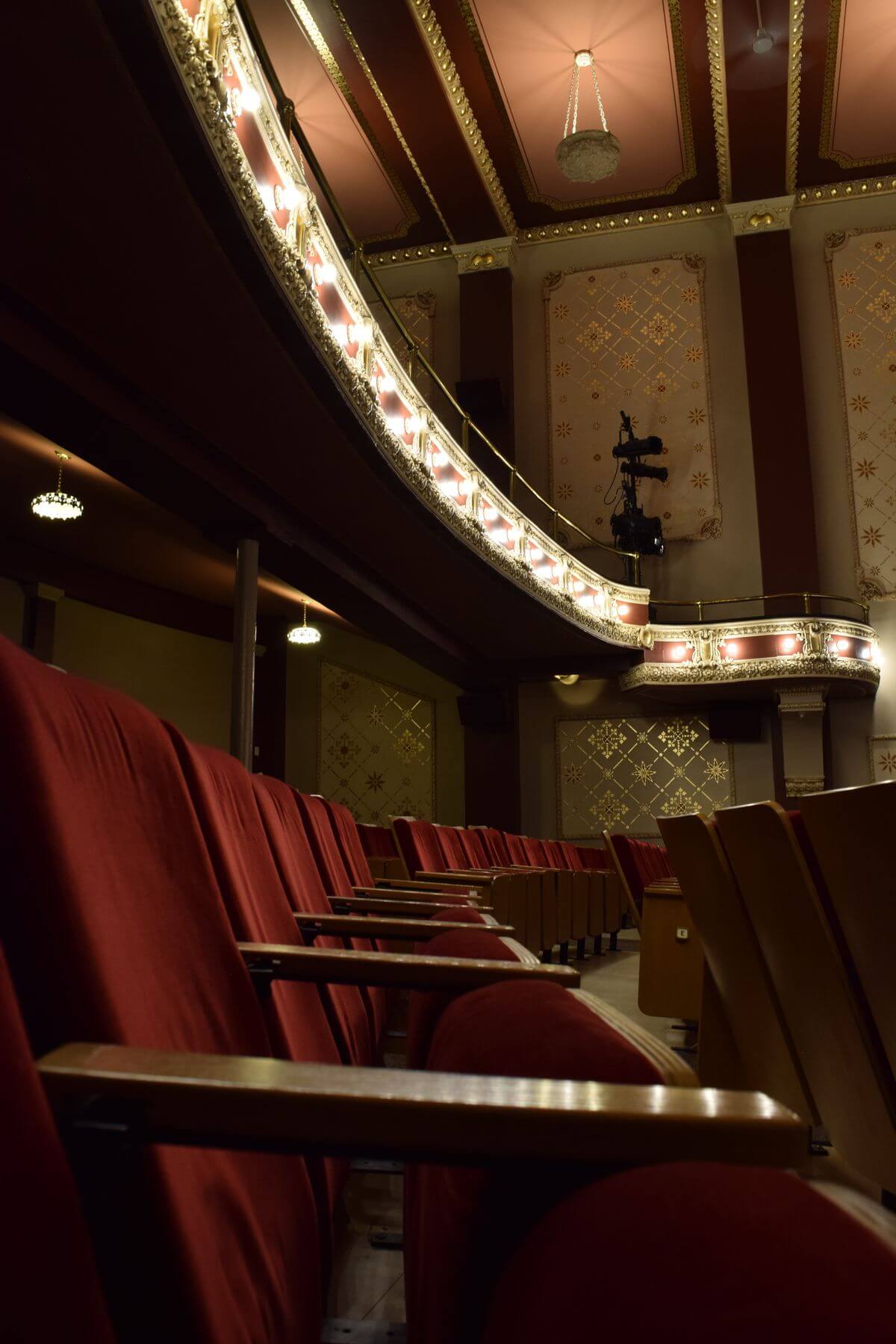 Cresco Theatre and Opera House has enjoyed a long history of live productions starting with the very first, 'High Jinks' in February 1915. We are fortunate to have Cresco Community Theatre supplement our entertainment schedule with several shows each year. Past performances include:

In 2014, the Cresco Theatre and Opera House celebrated 100 years with a year-long series of live shows and period movies.

At the beginning of 2016, the theatre closed for what was expected to be a month to repair the east wall that had drawn moisture causing the paint, plaster and ornamentation to fall off the walls. The city had taken time to remediate the moisture and Riehle’s had deemed the wall dry enough to repair and paint.

During the initial repairs, it was discovered that the ceiling was starting to fall as well so the project was expanded and the building got a new ceiling, a facelift and a wall repair. The Riehle Family donated the gold leaf on the ceiling in memory of their mother and grandmother who passed away just before the started this project. Their attention to detail in the Theatre brings to life every tiny detail from the cherubs and shields to the tiny eggs on the light fixtures on the ceiling. During this time CCT Productions donated funds to replace the light bulbs on the proscenium arch and the front of the balcony with LED bulbs helping the theatre become more energy efficient. This project was completed and the theatre reopened on April 1, 2016.

Through donations and grant writing the theatre has been able to replace the front doors, put in a PA system, replace all the tables and chairs in Champlin Hall, and more. We are blessed with a supportive and generous community.